Now Venus has lead the way to the distributed storage pool of Filecoin through components like venus, venus-sealer, venus-miner, venus-wallet, venus-messager and venus-auth. In the future, Venus will continue its evolvement and jointly promote the open source development of Filecoin ecosystem.

# Why are we doing this

Before IPFSForce’s application, maintenance effort is seriously lacking in Venus project. In terms of protocols and components, vm,mpool, chain, rpc are all available, but all have different kind of issue. It takes Venus team more than 3 months to gradually fix protocol layer, code layer, and problematic fuctions, making Venus complete the interoperability with Lotus, so that the nodes using Venus can run smoothly in the Filecoin network. And then we let Venus support calibration and 2K networks.

After completing the above work, we start to set the roadmap of Venus development.

We plan to let Venus support the development of storage pool. At the begining, we decide to achieve the best of expansion from a single storage provider. It is technically feasible, but the biggest problem was caused by the mechanism of Filecoin proofs. Storage providers in the Filecoin network have to submit the PoSt periodically, and in order to generate the proof, they need to read the data of a whole Partition. If all sectors are distributed in different places, to read the data through the public network will be heavy time-consuming.

The external features of Venus distributed storage pool are similar to other pools. Storage Providers can store their resources in distributed geographic nodes. As long as there is a stable connection to the network, the storage provider can create a node accessible to Venus storage pool; The probability of earning the block reward is proportional to the amount of storage the storage provider contributes to the Filecoin network, and the final result of separate calculation and overall calculation should be the same: n1/p+ n2/p+n3/p......= (n1+n2+n3+.....)/p, which provides a theoretical basis on the algorithm.

For the storage and retrieval, storage providers can access the network through the venus unified entrance or by themselves. In the design and with the permission from storage providers, venus will select the appropriate node to store data according to specific requirements, so that the data is closer to the real scenario.

The following figure is a typical application scenario in our design. 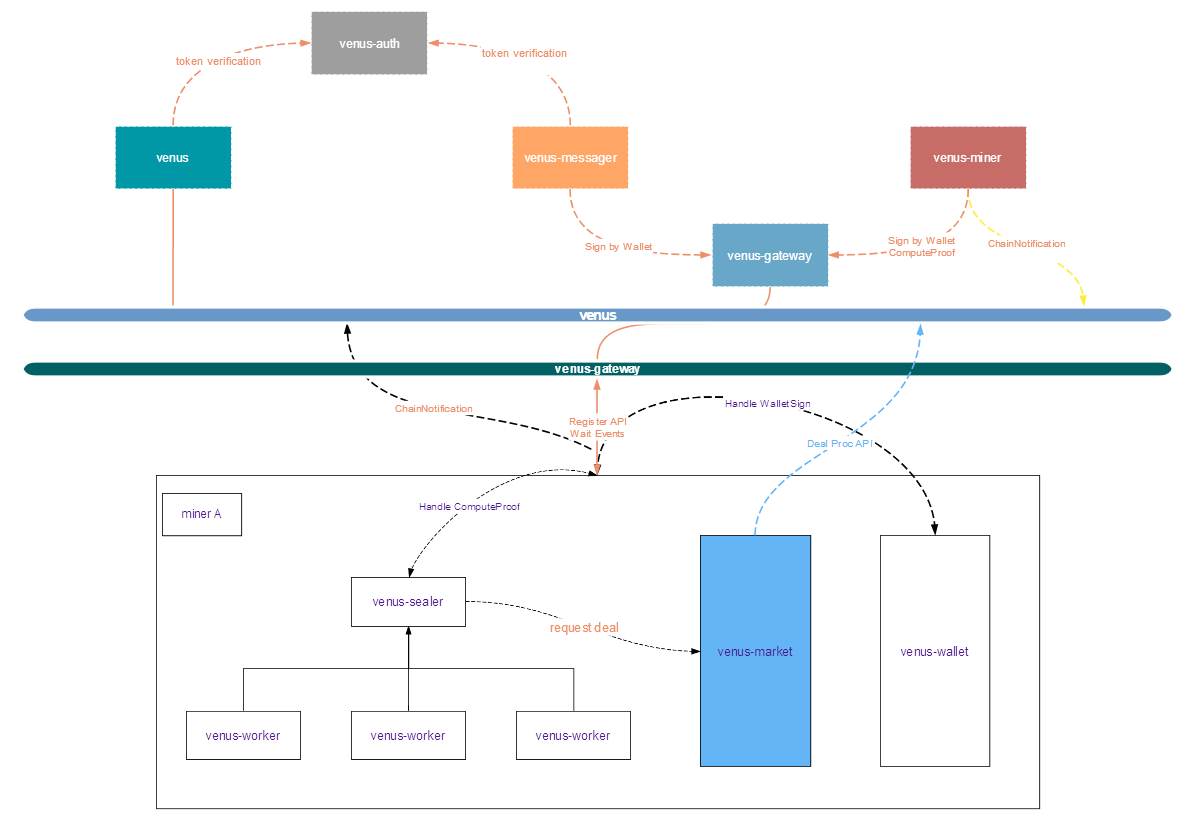 The following contents show the relationship between components, which are similar in function, but with more powerful expanded functions in details and uses.

venus-auth is a component used for authorization. In a typical deployment environment, venus-auth is used to provide authorization services to venus, venus-miner and venus-messager. Local nodes need to be authorized to have access to the shared components. Based on the authorization, venus-auth will expand its functions, such as security control, including access restriction and blacklist.

venus is similar to lotus-daemon, which is used to support all nodes. venus is connected to the Filecoin blockchain network to provide data support for Venus. venus can be used as an ordinary node. It has all the necessary functions of blockchain nodes, such as chain, mpool and wallet. The APIs of venus are almost compatible with those of lotus (you can mention the issue of incompatible APIs). On venus, you can create private keys, query assets, transfer funds, etc. In a typical deployment environment, venus only provides data query service on the basic chain without private key restoration. The block data needed by slashfilter is stored in the database, and the node itself is stateless. In this case, venus node can realize its high availability through nginx reverse proxy.

Therefore, if you are interested in the mixed deployment of venus / lotus, you need to use Venus project which is compatible to Lotus or pick your own CCS.

venus-wallet is a remote wallet, which can support both Lotus and Venus in terms of protocols. In a typical deployment environment, this module is deployed locally by storage providers, and the security of assets is guaranteed by certain policy configuration. venus-wallet has the following features:

venus-sealer continues the basic features of the mining part of lotus. We separate the mining related code from the sealer to form venus-sealer. The differences are:

# Some ideas for the future

The following plans mainly focus on: